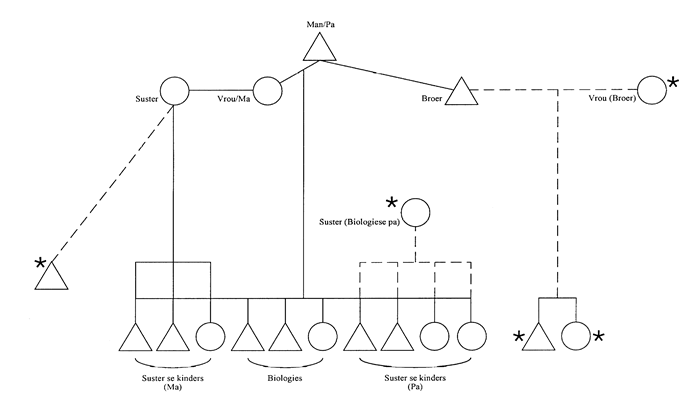 Oliphant, E (Department of Social Work, University of Johannesburg) and

Traditionally, intervention strategies used in South-Africa were based on western practice models. It has become clear that intervention strategies should be custom made for the South - African welfare system.  Authors such as Matumba (2001) and Oliphant and Roestenburg (2004;2005) have all pleaded for cultural sensitive practice based on indigenous models.  The development of indigenous models is however based on solid theoretical frameworks. This article reports on a study which was done in order to describe traditional Tswana families. Most Western families can be described in terms of the systems theory. For the purpose of this study the researcher explored the Tswana family in order to link the dynamics with systems theory. It is envisioned that description of the family systems of Tswana families will be used as a basis to develop intervention models.

MOTIVATION FOR THE STUDY

The study was motivated by the fact that a lack of indigenous material exists on the dynamics of Tswana family systems. It is often assumed that all families form a system with specific dynamics, no matter the cultural background. Therefore it is also assumed that traditional African families function in the same manner as any other family system. No evidence has been gathered to support this assumption. When intervening by means of family-focussed intervention, the social worker needs to have a comprehensive understanding of the cultural background.

This is confirmed by authors such as Sikhita (1996:61) who argues that the worker’s knowledge of the client’s cultural milieu is a necessity in understanding the client as well as in the helping process.

Secondly, the study was motivated by the lack of indigenous South-African intervention models specifically addressing family problems. In order to develop such models it is however important to describe traditional family systems. Though an enormous task in the making this study aimed only at starting the process by describing the family system in Bapong.

International and local literature supports these important motivation points. On an international level Cheetman and Griffiths (1982:956) say:  “Western therapeutic models based upon first world principles are rarely fully consonant with the beliefs, expectations and the worldview of the third world client system to whom it is so often offered”.

Bridges, Brown, Breyer and Roark (1997:141) plead for cultural diversity integration within the social work profession. In a study done by the authors it became clear that on an international level there is an alarming lack of knowledge and skills in practitioners, regarding cross-cultural practice.  Caple, Salcido and Di Crecco (1995:160) specifically mention that there is some urgency to the need to explore means of intervening with culturally diverse families and children.

From above need the basic motivation for this study developed namely to give a scientific description of the social functioning of the traditional Tswana family in Bapong.  The results of the description can be used to develop a model for the third world client within his own culture.

From practice it is clear that it is difficult for a social worker to be cultural neutral.  The social worker should understand the client within his own culture but should also be open to the culture itself to have a better understanding of the client. It is thus clear that social workers should adapt their own style to integrate perspectives from different cultures.  A paradigm shift, based on a sound knowledge framework is a necessity to be able to work in a cross-cultural context.

Each person has a culture that forms part of his/her identity.  For this reason it can happen that a culture shock is experienced when a person starts working cross-cultural.  Lynch and Hanson (1998:30) says:  “Culture shock is the result of a series of disorienting encounters that occur when an individual’s basic values, beliefs and patterns of behaviour are challenged by a different set of values, beliefs and behaviours”.  For this reason it is important that there should be a clear awareness of cultural perceptions.  Such awareness must be based on knowledge and understanding of the cultural attributes and values.

With above paradigm shift in mind it is important to be sensitive to other cultures.  Lynch and Hanson (1998:6) explain to be sensitive to another culture is not to know everything about that culture, but to be aware of the differences and similarities.  Family’s participation to intervention programmes can be influenced by their culture.  It is the social workers responsibility working with a different culture to understand the other culture and learn about this culture to be able to help and understand the client.

Furthermore Lynch and Hanson (1998:43) feel that professional people should be very aware and know their own culture, beliefs and morals to be able to work with other cultures and to be able to cope with the culture shock.  The paradigm shift puts the emphasis on the knowledge development regarding a culture in order to develop awareness, which is necessary to intervene effectively.

In order to develop such a knowledge basis and linked awareness, the researcher embarked on a qualitative study. Qualitative methodology was chosen specifically to collect in-depth data on the Tswana family. The researcher selected participant observation to collect data from three families in Bapong. De Vos (2002) argues that participant observation focuses on the everyday and natural experiences of the respondents. The researcher must strive towards obtaining information on experiences and feelings regarding their circumstances. This method of data collection based on the phenomenological approach was clearly an ideal choice to gain knowledge. De Vos (2002:281) also outlines a specific process of data collection, which was used in the research process. This process includes (1) problem definition (2) selecting the research field (3) gaining permission to enter the field (4) bargaining for a research role (5) maintaining relationships (6) gathering data (7) leaving the field (8) analysing data and (9) writing a report.

Although all these are worth mentioning, it is steps (3) and (4) which were of specific value to the researcher in learning cultural values on a broader level. Negotiations with the traditional leaders in the community were very important.  The student, supervisor and a professor from the United States (informal supervisor) met with the traditional leader and other informal leaders.  The objectives and possible outcomes research was discussed and permission obtained from the natural leaders. Valuable information was gathered from this meeting and these leaders also confirmed that participant observation would be effective in trying to develop a better understanding of the community.  The community leader also identified specific families who could participate and who they thought were representative of the community. This emphasizes the importance of including the natural leaders of the community in the research process.

The collection of data took place by means of the mentioned participant observation. The researcher visited each family for a day and observed and

participated in the family activities. The researcher asked permission to take field notes and make audio-tapes. Spending a day with families from another culture as well as families who are experiencing poverty influenced the researcher. The researcher was motivated towards more engagement and involvement in the community after development of an understanding of the needs of the families. This knowledge could be seen as the basis of awareness development. The following graphic outlines the process of research that was developed. It links the formal steps with the experiences of the researcher.

The unit of analysis for this study were three (3) traditional Tswana-family in Bapong.  For all purposes of this study, these families were seen as extended families.  The area of Bapong can be described as rural and the families don’t have any real access to urban areas.  From the data collection it is evident that western influences are limited as there is not much exposure to life outside of Bapong.

The following genograms provide information on the family systems.

Graphic 3 : Genogram of Family One 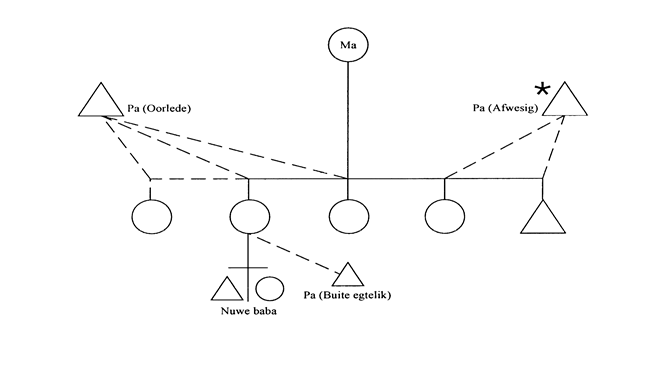 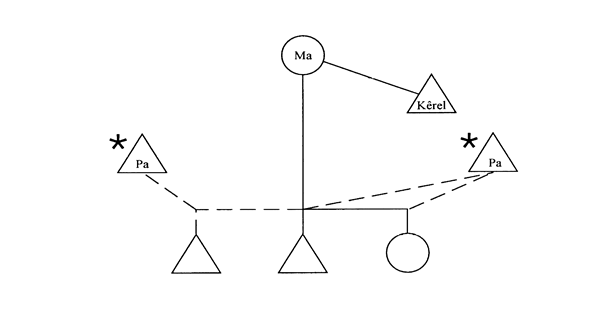 RESULTS OF THE DATA

From the data analysis central themes were identified.  Analysis proceeds by extracting themes or generalisations from evidence and organising data to present a coherent, consistent picture (Neuman, 1997:329).  The themes were the results of the study and can be used as the parameters for developing a discussion on Tswana families:

1)      In the traditional Tswana-family in Bapong the oldest son takes over the authority role when both parents pass away.  He accepts the responsibility for the family and makes the decisions.

3)      If the biological father is absent the mother takes over the authority role, she then makes decisions, solve problems and takes responsibility.

4)      If the biological father physically leaves the biological mother and children he has a total absent role in terms of contact any physical contributions to the family.

5)      Any children of the family that physically lives with the traditional Tswana-family in Bapong have equal roles with the biological children in the family and all the children are treated equally.

6)      All children, biological or children of family, needs and care taking comes first before anything else.

7)      Formal education of the children, for the sake of their future is seen as very important within these families.

8)      Any adult are allowed to discipline the children even if it is not the biological parents.

9)      Teenage problems, specifically out of wedlock pregnancies, cause conflict between parents and teenagers.

10)    The lack of basic needs overwhelms the traditional Tswana-family and family members tend to become apathetic.

11)    These families communication are open even about sensitive issues, the children don’t participate verbally.

12)    During conflict situations the whole family get together to solve the problem especially the members involved in the conflict.

14)    The traditional Tswana-family in Bapong is not a closed unit and any person can freely move in and out of this unit.

15)    The care taking of the children plays an important role in this family, but they don’t show affection.

From the abovementioned results it is clear that Tswana family systems can be described by means of well-known theories such as the systems theory. Systems dynamics include power issues, authority, rules regarding decision-making, problem-solving, role division, conflict management, subsystem and boundary development and communication.  (Brown and Brown: 2002; Hanna and Brown: 2002; Boss: 1993; Oliphant: 1993; Minuchin: 1993; Bitonti: 1993; Goldenberg & Goldenberg; 1991; Hoffman: 1990; Kasiram: 1991)

Social workers working with families should work towards a better understanding of the cultural backgrounds of these systems. The development of this understanding is of importance not only to the family members but also to the social worker. Where limited literature is available this development of knowledge must be based on research. Though the study reported on in this article was in-depth in nature, more quantitative studies testing the results are important. The results indicated that Tswana families like all other families function on a basis of systems dynamics. Factors based on structure and communication must be used as constructs in a follow-up study which includes more respondents. It is also suggested that a indigenous model is developed to address families in the South-African context.

Scroll back to top